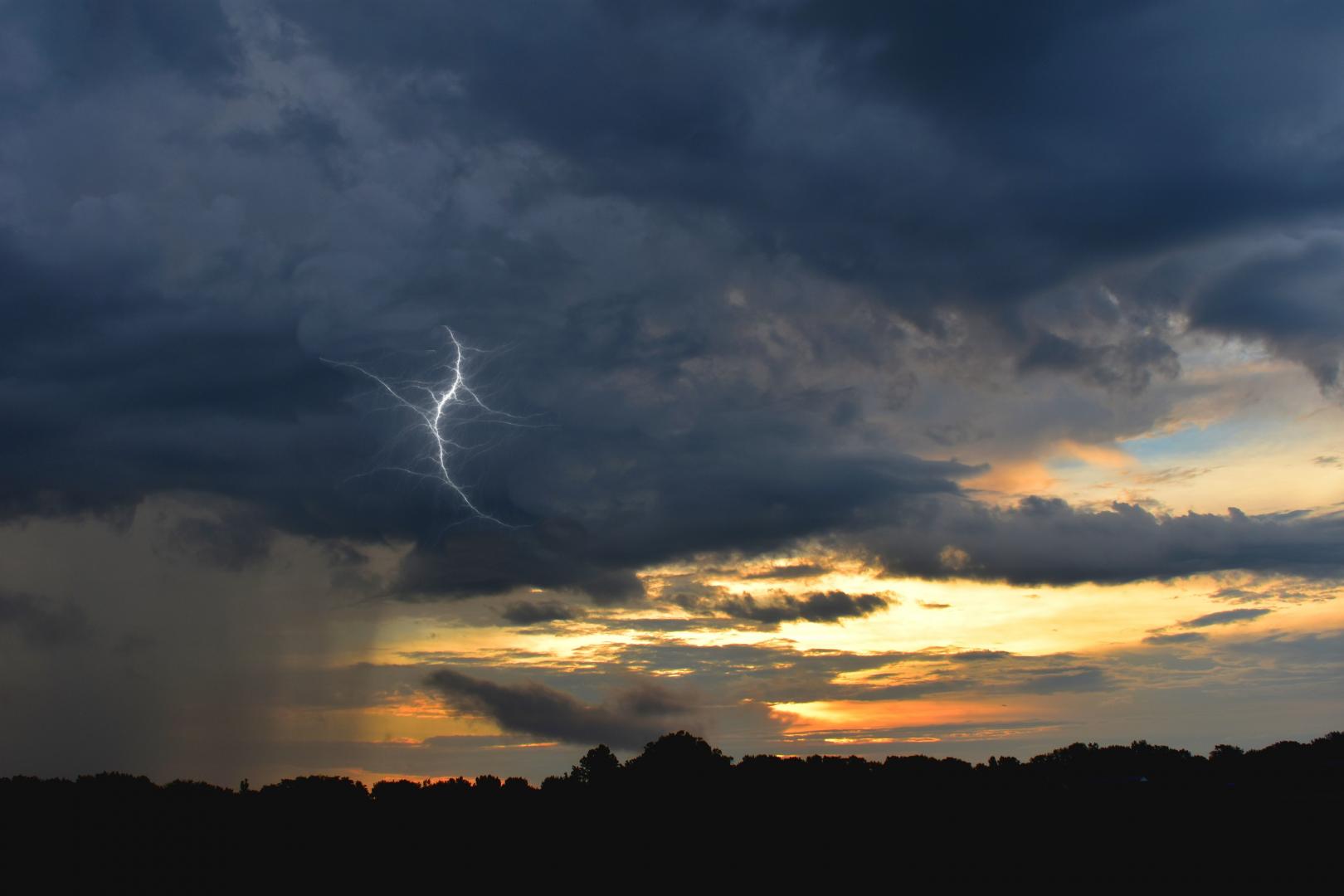 Thunderstorms: a Part of Summer

It was sometime in the early 1980’s when Travis Holt and I were fishing a small lake in northeastern Indiana. It was a time when a career and raising a family were priorities. Fishing time was limited and I had long anticipated this short weekend trip.

We slid my small boat down the sand ramp just as wisps of light began streaking across an azure eastern sky. It wasn’t long before we began plucking beautiful black crappies, like vine ripened tomatoes, from a submerged weedbed.

As morning turned to afternoon white puffy clouds slowly began doubling in size and had taken on a gray tint. “I think we have a storm brewing,” Holt said, looking at the western sky. “Think we should start making our way back?”

I had waited for this trip for months and the “tick” of another crappie inhaling my small jig made my answer simple. “Nah, I think it‘s going to miss us,” I said flipping another fish into the bucket. “Last night’s weather forecast wasn’t calling for rain either,” I added, trying to give some credence to my decision.

It wasn‘t long before the temperature dropped and a strong wind began to blow. Holt hooked another fish just as the first few raindrops “pinged” against the bottom of the aluminum boat. We realized that in our haste to get on the water we had both forgotten rain gear. Little did we know that would be the least of our impending problem.

Then, without warning, a massive lightning bolt dropped from the sky exploding the top of a huge cottonwood tree less than a hundred yards from the spot we were fishing. The sound was deafening. Leaves, bark and twigs rained to the ground as we immediately headed for cover. We were human lightning rods sitting in a boat on the water holding our fishing poles.

“That’s the last time I listen to you,” said Holt, as we sought shelter among a thick grove of similar sized trees. We were stuck outside in a cold, torrential downpour as lightening cracked all around us. “Let this be a lesson?” I thought, as water cascaded off my bowed head and shoulders. I had put fishing above safety.

By the time we made it back to the truck, our gear was completely soaked and Holt looked like a cat in the bathtub, his hair matted flat against his scalp. We both shivered in our shorts and T-shirts as we loaded the boat and poured water from our tackle boxes.

Blue sky began peeking through the clouds and although the storm had passed, we had to head back to the cabin to change clothes and dry out. If I had paid more attention to the clues the sky was offering we could have avoided some misery and more important - risks! It was a lesson both of us will always remember.

There are basically two types of weather: frontal and local. Frontal weather occurs when two different masses of air - like cold, dry air from Canada collide with warm, moist air from the Gulf of Mexico. These types of storms can last a day or more and sweep large portions of the United States.

What Holt and I were victims of was localized weather, caused by conditions like temperature, humidity, winds or geography. Those white puffy clouds that billow up into thunderheads? That’s local weather.

Without a doubt, thunderstorms are the most dangerous. Most injuries and deaths caused by weather in the United States are thunderstorm related. The sun’s heat energy is a major factor in the generation of thunderstorms which is one reason why our spring and summer months can be the most volatile. In most cases winter sunshine does not provide enough warmth for thunderstorms to develop.

When engaged in any outdoor activity, it pays to keep an eye on the sky. You know those small, fleecy white puffy clouds (cumulus) that lazily drift through the sky? They can grow into a thunderstorm in a matter of hours. These clouds have flat bases and rounded tops. They are usually not an immediate threat as long as the cloud tops are less than one cloud width above its base. The presence of these types of clouds in the morning or early afternoon indicates the atmosphere is unstable enough to generate a thunderstorm. If these are the only clouds in the sky by late afternoon or evening there probably isn’t much risk of inclement weather.

Now, if these same white puff clouds become taller than they are wide, they change to swelling clouds (cumulus congestus) and the chance of storms increase dramatically. These are the clouds you need to watch closely especially when they turn from white to gray. They are the first stage in thunderstorm development and can become dangerous in a matter of minutes. This was the same type of weather that had Holt and I pinned down in that grove of trees. Their growth happens quickly and the faster they swell the more threatening the storm can become.

Weather forecasting is a very complicated science and there is no one who can predict it 100 percent. I’ve always said the “Man upstairs” created meteorologists to prove he’s still the one in charge.

This information is only meant to help you make informed decisions. When the chance of any threatening weather condition exists, it’s always best to err on the side of safety. No outdoor adventure is worth risking your life.