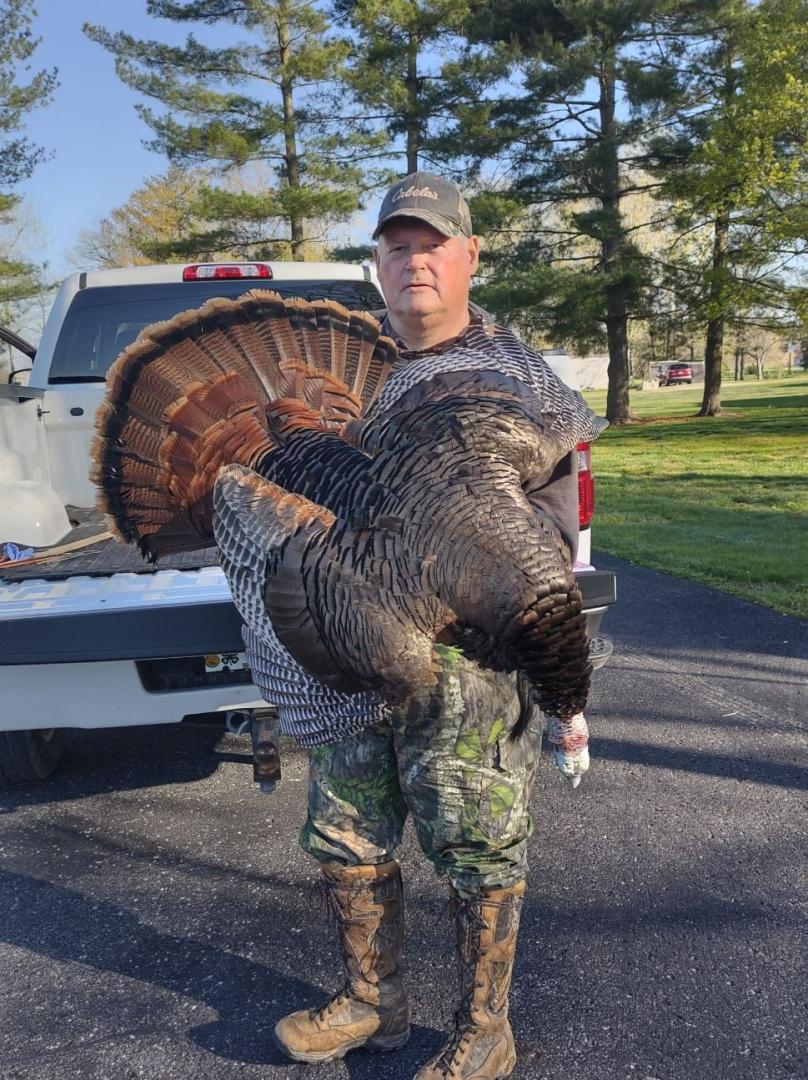 When Kim Bailey snagged what he considers the most photo-worthy turkey he has ever tagged, it was the second day of a spring hunt he enjoyed from the scenic pastures of the Kentucky horse farm near his home. The first day, the scenery was the only entertainment as the morning stood quiet and still without so much as a gobble.

It was the second morning as the sun began to rise that the familiar gobble of a large tom caught his attention.

It was then he pulled his well-used dried wing from his vest and began flapping it to mimic the sound of a hen flying down from the roost. Without even making a call, the strutter came running into Bailey’s view and became what the veteran hunter estimates is the 170th bird he’s harvested.

“With every one I kill, I thank the Lord,” Bailey said. “That picture of the turkey is of a beautiful specimen, and they’re such beautiful birds.”

For Bailey, his life as an outdoorsman began at 15 years old when his sister drove him to a spot the family had been scouting, dropped him off and left him until nightfall. Before the sun set, however, he scored his first deer with a bow.

Since 1980, the attraction of the crisp morning air and a throaty gobble in the distance has been what brings Bailey back to the woods season after season. And his love for turkey hunting has led him to adventures in Alabama, Tennessee, Missouri, Nebraska and Oklahoma—with Missouri holding a special place in his memory.

Bailey was fortunate to spend a number of spring days scouting and hunting various farms in Missouri, but there was one that was always out of his reach. When he and his party saw a gaggle of big gobblers out in the field, a field they didn’t have permission to hunt, this farm became a destination he dreamed about. The itch stayed with Bailey and his buddies until the next spring season when they decided to drive all night from Kentucky to Missouri on opening morning and ask the farmer for permission to hunt there.

The farmer recognized Bailey and his crew from years before and was surprised to hear they made an overnight trip just to ask for his blessing.

“He said we were crazy, but he let us hunt on his property and treated us like family for the next 16 years,” Bailey recalled. “You have to know how to talk to people.”

Nowadays, Bailey prefers the spring hunt over fall season. Though he has been watching his trail cam footage recently and the birds are in convincing enough numbers that he is considering breaking tradition and heading out soon with a bow.

“I’m kind of old school. Everything I hunt with looks like its well-used because it is,” Bailey said of his methods for chasing down toms. “And though my ponies aren’t as young as they used to be, I rely on scouting more than actual hunting tactics.”

Bailey contributes his bird hunting success to putting in the work and knowing where to go, which aside from his state travels also included for him many iSportsman managed destinations such as Fort Knox, Fort Rucker and Fort Leonard Wood. And like Bailey, it may take until your 170th bird to harvest one so picture perfect you want to share it with everyone, but it’s all about the people you meet and experiences you have along the way that matter.

“There are a lot of things in turkey hunting that take several years to figure out.”

Special thanks to Kim Bailey for sharing his hunting stories with the iSportsman team!

Hunters everywhere are gearing up for their favorite time of year. And to celebrate deer season at its peak, we're asking you to share the story or photos of your first deer or other great hunting experiences you'll never forget. You could see yourself in the next edition of Checking in With iSportsman. Submit your deer photos and stories by following this link.