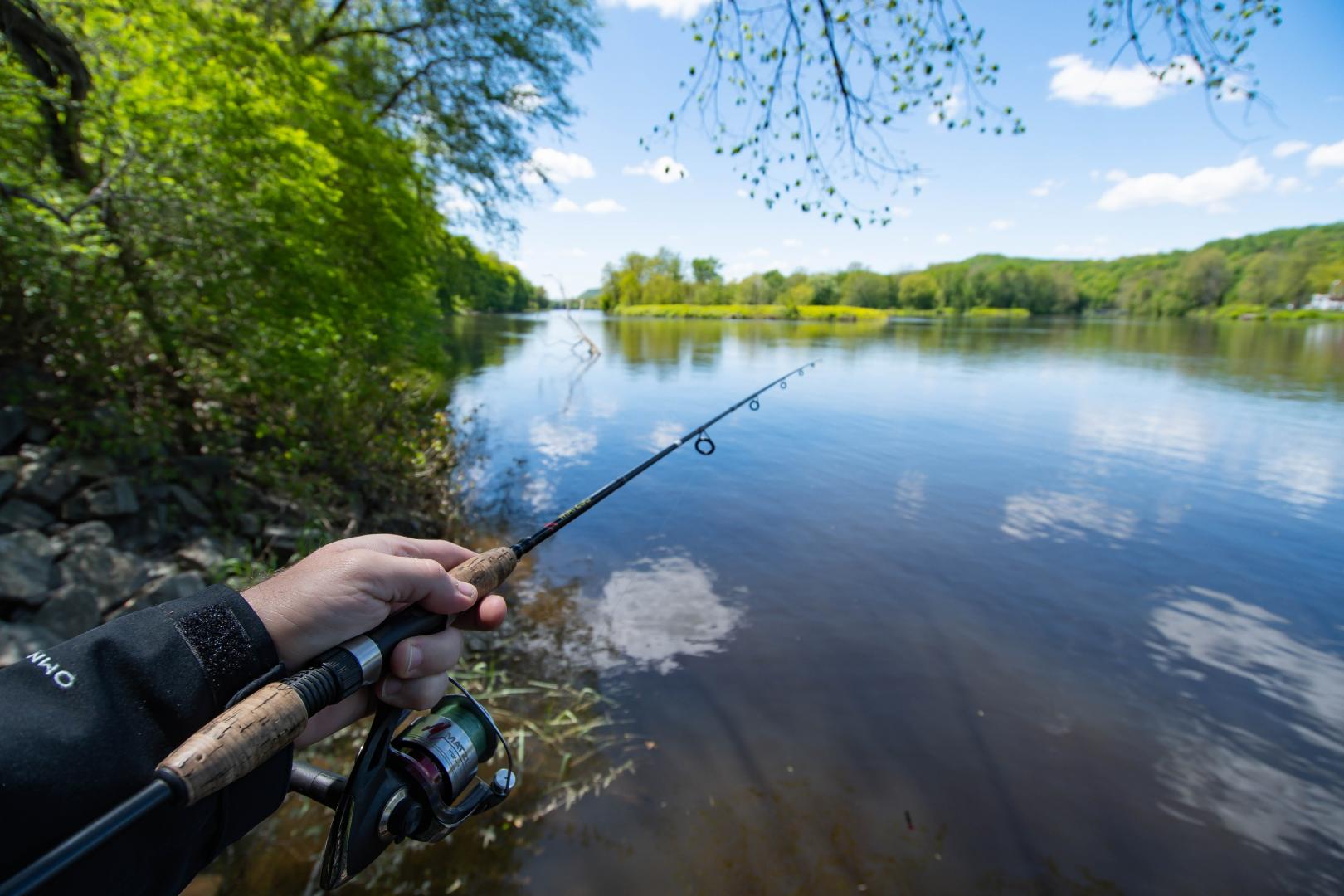 Before the green spinner had even started moving, a black shape streaked through the tea-colored water like an attack submarine bearing down on the tiny lure. With a flick of the wrist, the shallows detonated into a mushroom cloud of mud as the rock bass protested the string of the hook. A less than a minute later the battle was over, the chunky fish was streaking back home no worse for the wear and perhaps a bit smarter.

For stream fisherman in this part of the country, it would seem that smallmouth bass are the only reason for existence. This writer is often guilty of such angling narrow-mindedness. However, while the bronzeback is the undisputed king of the creek, the black and green prince is hiding among the rocks and roots, ready to offer good fishing even when the smallies are sulking.

Often called the redeye or goggle eye, the rock bass is a scrappy panfish that often keeps a creek or river trip from being a total bust. Given their voracious appetite, abundance and excellent table qualities, the rock bass is an often-overlooked gem hidden among the rocks of the streambed.

Just a few days ago we waded our favorite section of Sugar creek for approximately the 10,000th time. In spite of favorable water and weather conditions, the smallmouth bass were off hiding somewhere but the redeyes were on a positive feeding frenzy. Once the correct lure color pattern was determined, the fish almost fought for the honor of being hooked.

The fishing this day was superb and I watched the drama of the strike unfold repeatedly in the low clear water when fish made tentative darts from cover near the bank while deciding to commit to the attack. A slight shadow, like a ghost, could be seen in the shoal water until the fish pressed on and lit the afterburners, nailing the lure with kamikaze zeal.

While the panfish quickly tire, they do give a good account for themselves when hooked, swimming in violent spirals until the pressure of the line is too much. After years of fishing, I still enjoy catching that first glimpse of the thick, bronze and watermelon-colored fish as it flashes at the end of the ever-shortening line.

Unlike smallmouth, rock bass are usually found in the pools or calm, still areas away from current. Typical of their name, they are usually wedged in and around rocks sometimes covered by less than a foot of water. Even though a lone rock sitting on a clean slate bottom may not appear to hold fish, it is not uncommon to catch two or more of the gregarious goggle eye from the same spot. Reeling in fish after fish from the same rubble pile, it would seem that the rock bass likes to perform an aquatic version of the old circus clown-car stunt.

The rock bass is such a willing biter that many different lures can be used successfully though they can be sometimes maddeningly picky. This writer’s old standby is tiny, green backed deep-diving crankbait that appears to be a tiny succulent crayfish as it bumps along the bottom. Over the seasons, I have found that this one lure will produce at least a few fish on every trip with the added bonus of an occasional smallmouth.

The only real problem fishing for rock bass is their haunts. Since you will be fishing around rocks and roots, hung-up lures are a fact of life. If you plan to target rock bass specifically, you should be willing to spend a fair amount of time performing search and rescue or the fishing can quickly get expensive.

Rock bass are opportunistic feeders but are most fond of crayfish and small minnows with a side-order of aquatic insects. Thus, lure colors should start with orange or brown patterns and rotated until the fish vote for a favorite color of the day.

When the fish are being picky, it pays to have a nice selection of patterns. On the days when the fish are slow to strike, a small spinner such as the Roostertail in 1/16 to 1/8 ounce size will usually draw some action. I tend to favor dark colors and gold blades for stream fishing, but a lighter shade with a silver blade will sometimes draw more strikes on a bright day.

Just because the rock bass is a panfish, fishermen typically dismiss it as ordinary table fare. However, the fine-textured white flesh is actually very similar to walleye and some even consider it better. This writer certainly does!

During my next stretch of days off, you will find Your Humble Servant sneaking up a creek to take yet another shot of ol’ redeye.

I have heard that some of you have suspected as much.