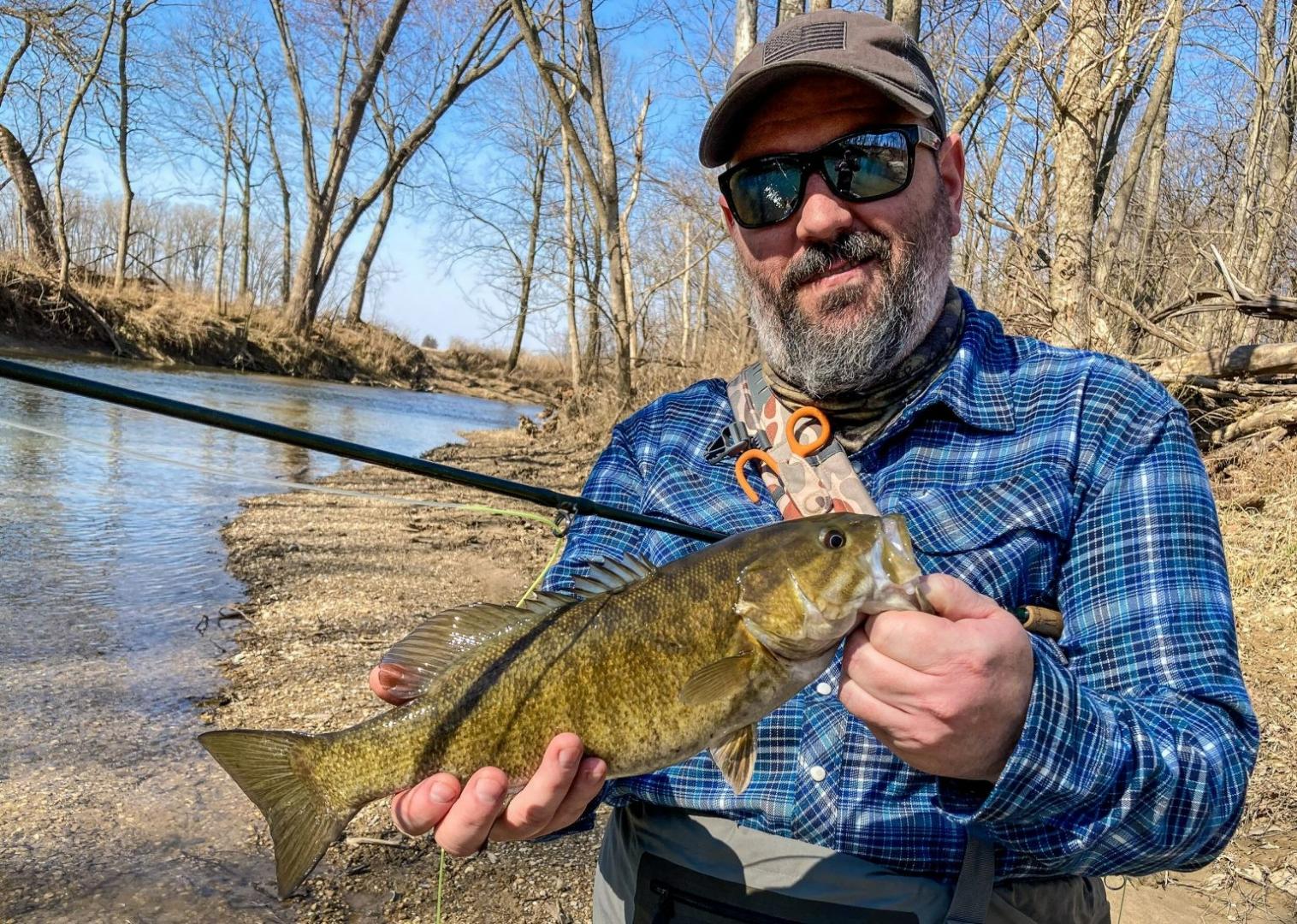 If I could only catch one more fish in my life, I’d want it to be a smallmouth bass. Pound for pound, smallmouth fight harder than any other fish I’ve ever tangled with, and they live in some of the prettiest waters to explore. Across the Midwest, smallmouth action is on fire.

Smallmouth become active earlier in the year than most other game fish. Especially in lakes. The pre-spawn period generally kicks in during late February when water temperatures push into the upper 40’s. So the spawn in lakes is over, but in some rivers, it’s still going strong.

Fishing for native smallmouth in Midwest rivers doesn’t get the attention it deserves. Pick up a few fishing publications, especially any fly fishing publication, and you’ll see a lot of articles written about river fishing for trout. Most of those articles will be about fly fishing. Smallmouth are just as fun, if not more so, to pursue with a fly.

If fly fishing isn’t your thing, you can still use a traditional spinning rod to present a fly. The float-and-fly method of taking smallmouth bass has become a popular tactic. The method is as simple as it sounds; float a fly under a bobber. Depending on the current in the river, you may need to add a split shot or two.

The process isn’t too exciting, but the results often are. Locate a promising stretch of river with some deep water. Adjust your float for the proper depth, understanding you may have to adjust your depth to make sure you’re getting down close to the bottom. Cast, then drift. The chop on the water will bounce your float, giving life to your fly. Add in a few twitches sporadically.

Strikes are often subtle. Pay close attention to your float. There is a good chance you will see strikes without feeling them. Smallies will come up for the fly, but you have to be in the strike zone. Experiment for depth. Start high and work low, making numerous passes through a promising run before abandoning hope and moving on. The action may not be fast, but stay alert. Spring is when the pigs come out to play.

Smallmouth bed in shallows and on gravel flats, while generally associating with some sort of structure, such as fallen logs and boulders. Females will spawn out and move off their beds to recuperate in deeper water, leaving the smaller but more aggressive males to guard the nests. Any flies floated near enough to the nest to pose potential danger have a good chance of being annihilated.

The float and fly method is just one way to catch smallmouth. Spinnerbaits, stick baits, soft plastics and jigs all catch tons of smallmouth. Any erratically fished bait imitating an injured fish should produce, as do typical top water lures, like jitter bugs and spooks fished close to cover.

Many smallmouth rivers are perfect for wade fishing. You should always wear closed toed shoes or boots to protect your feet from any metal or glass that may have found its way into the water. If you’re fishing waters big enough to float, there aren’t many pastimes more rewarding than gliding down a river in a canoe or kayaking and fishing for smallmouth bass.

See you down the trail…

Photo courtesy of the Sportsman Magazine.