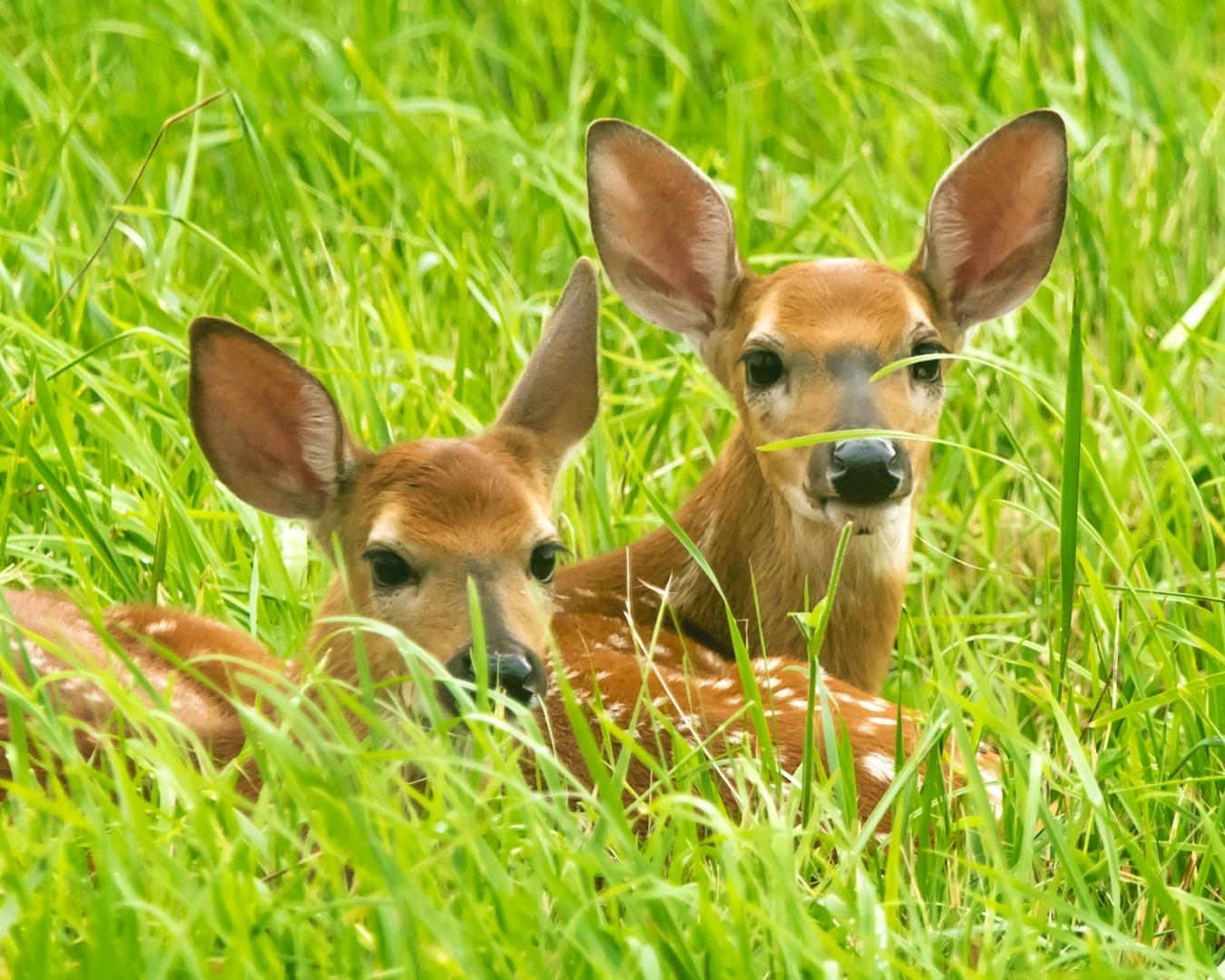 It’s common knowledge it takes nine months from conception to birth for a human baby. It’s actually, 280 days - give or take a day - but normally, that figure is spot on. Humans have no “breeding season” as do many animals so the number of births on any particular day or time of year is constant. For cottontail rabbits it’s only 29 days and with a breeding season here in the upper Midwest from March through September, figure baby bunnies could be encountered anytime from now well into October.

Whitetail deer have a gestation period of 201 days but they have a very short breeding season. In this area does will become fertile sometime during the middle ten days of November. In this area, the vast majority of female deer will be bred and impregnated during this November “rutting” season. The few that don’t will certainly be bred about a month later when they once again become fertile.

So when are baby fawns born? Simple answer - count 201 days from mid-November and you come up with - right about this time of year and on into the middle of June.

When is a favorite time of year for people to be outdoors or just out and about in this area? The same answer as above can be given - right about now and on into the middle of June.

If that “out and about” activity takes you to a thicket, a patch of tall grass, an unmown area around a pond, a grassy ditchbank or just a quiet spot in your back yard, these all are places where fawns have been found. For the first few weeks of a white-tailed fawn's life, its mother will hide it in secluded locations. This behavior helps reduce the potential of predators finding the fawn.

A fawn's spots are excellent camouflage and will help it stay hidden from predators. In addition to being hidden by its mother and having its own spotted camouflage, fawns have another adaptation to help them survive – they are virtually odorless when they are young.

Later in the summer fawns are seldom found more than a few yards away from their mother. If you see a fawn, you expect to see the mother. That’s not the case for the first month or so of the fawn’s life. Momma deer is probably nearby, but usually unseen. So if you find a fawn alone there is a good chance it is supposed to be there.

It is natural for deer to leave a fawn unattended so as not to draw attention to where the fawn is hidden. The mother will return periodically to nurse her fawn when she feels it is safe. If you happen on a hidden fawn, lucky you. Now smile and get out of the area.

For your safety, as well as that of the animals, it is critical for wild animals to retain their natural fear of humans. Never handle or attempt to tame wild animals. Habituated deer, especially bucks, can become aggressive as they mature. Even if the deer seems tame and approachable, it is still a wild animal, it’s unpredictable and can seriously injure a person.

Leaving deer or other baby animals in the wild ensures they have the best chance for survival. Every day an animal spends with humans makes it less likely to survive in the wild. Only licensed wildlife rehabilitators may possess abandoned or injured wildlife. Whether it’s a bunny, a fawn or an apparently orphaned animal of any sort, unless a person is licensed, it is illegal to possess a live wild animal. Most rehabilitators are somewhat specialized, as well. It takes different skills to tend to different animals or different kinds of birds.

The only time a baby animal may be removed from the wild is when it is obvious the parent is dead or the animal is injured. Even if you are positive this is the case, the first step is contacting a licensed rehabilitator before removing an animal from the wild.

Rehabilitators must adhere to the law and have gone through training on proper handling of injured or abandoned wild animals and will work to return the animal to the wild, where it will have the best chance for survival.