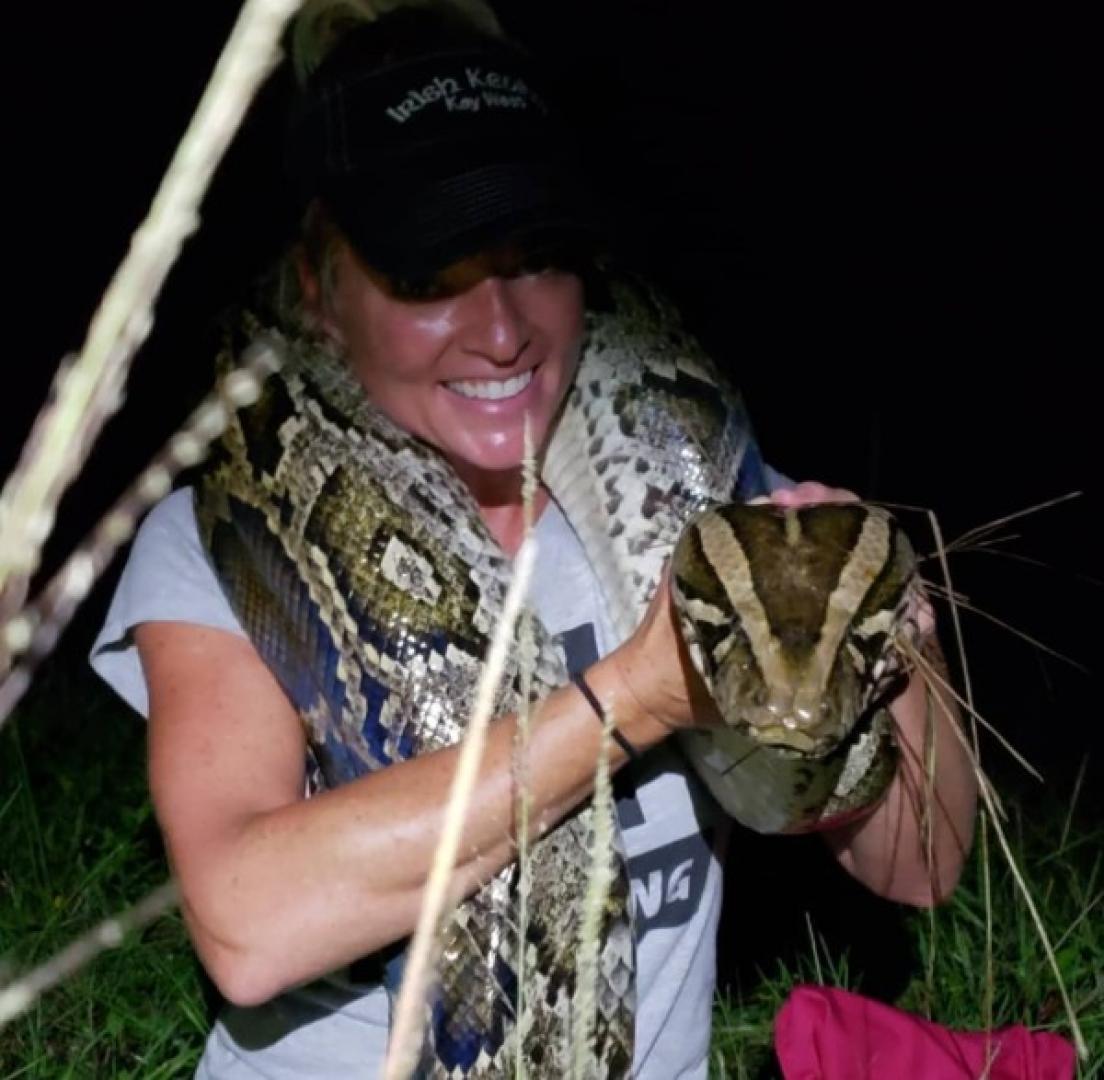 July is the last long stretch of downtime before deer season, unless of course you’re a Floridian on the hunt for an extremely invasive species: the Burmese python. Assumed to have arrived in Florida in the 1980s when the exotic pet trade was at an all-time high, the Burmese python is usually docile towards humans and non-venomous. However, reaching up to 10-feet in length in three years, these “pets” frequently become too much for the owner to handle, resulting in the snakes being released into the wild with devastating effects on the Floridian ecosystem.

The current population of the Burmese python in Florida is estimated to be between 100,000 and 300,000. And, with female snakes averaging between 60 to 100 eggs per year, that number continues to grow at an alarming rate.

Amy Siewe, one of 50 licensed professional python hunters for the South Florida Water Management District, is very much on the front lines of this ever-growing problem. During the summer these snakes are nocturnal, so professionals like Siewe start their workday heading out into land refuges near the Everglades around eight o’clock or nine o’clock in the evening, returning closer to three o’clock in the morning—sometimes later.

“Each python that we take out does make a difference,” says Siewe, “Just taking one python out of the everglades we are saving the lives of hundreds of our native species.”

Florida has witnessed a severe decline in native species in the southernmost regions of the Everglades because of the invasive python. A 2012 study done by the United States Geological Survey (USGS) found that raccoon populations had dropped 99.3 percent, opossums by 98.9 percent and bobcats by 87.5 percent since 1997. Rabbits and foxes have essentially been eliminated. Siewe and her teammates have even found a sixteen-foot python that had eaten a doe and two fawns in one sitting, showing no species is safe from the snake’s insatiable appetite, expansive jaw and monumental stomach capacity.

Siewe shared that it takes 200 mammals and birds a year to sustain a 10-foot python, and the average snake lives to be 25.

“The problem is the mammals and birds don’t recognize them as predators because they’re not from here,” Siewe explains. Meaning when a native Floridian species is approached by a python, they don’t react in the same manner as they would being approached by native predators. Making all native species essentially an easy meal.

Though, according to the Florida Fish and Wildlife Conservation Commission (FWC), pythons can be humanely killed on private lands at any time with landowner permission, public land hunting is usually left to the professionals like Siewe. But, between July 9 and the 18, the state holds an annual Florida Python Challenge inviting both professionals and novices to join. Both categories include a $2,500 prize for the most pythons caught and $1,500 for the longest. The increase in outdoor enthusiasm and hunting brought on by the COVID-19 pandemic in 2020 also brought a larger crowd to this competition last year, and with it came what Siewe described as “wild west behavior.”

Almost all python hunting involves live capture followed by humane killing. And often there is the misconception that you can go into the swamps with your guns and shoot snakes like other types of popular game, which isn’t the case. Furthermore, the misidentification of hatchlings—which come out of the egg at 24-inches long—can lead to hunters attempting to capture and kill native snake species of similar sizes and patterns. Some of which are venomous.

“Unless they really know what they’re doing, they shouldn’t attempt it because they could be doing more damage than good.” says Siewe, not to mention, it could get extremely dangerous very quickly.

“As much help as we can get—we need to get rid of them—but we need to make sure that the people who are helping us know what they’re doing so that they’re helping us and not hindering what we are trying to do.”

For this hunt, education is more important than recruitment. Something Siewe strives for through her social media presence, charity hunts and product line.

“There is this misconception. People see what I do, and they think I do it because I like to kill snakes– I don’t, its actually the complete opposite, I love snakes,” explains Siewe on why she works so hard to spread the awareness of the Florida python problem, “But, even if people can’t help directly, by going out and hunting pythons, they can give their support in different ways.”

Siewe cannot give guided tours or hunts for pay due to her contract with Florida state, so instead she auctions off hunts for charity. To date she’s raised $62,900 which has been donated to an expansive list of charitable organizations. Those who join her on her hunts usually enjoy the role of an observer, relishing the photo opportunity once the snake is captured. Siewe usually handles all the snakes on her hunts because of how crucial it is to her work to capture the snake once it has been found. Her product line has more personal roots.

“I’ve always hunted for food,” explained Siewe, describing growing up in Indiana as an avid deer hunter, “So, it was weird for me to come down here and hunt for pythons and not eat them—I’ve tried.” She disliked the fact she couldn’t do more with the animal after capture.

Aside from python meat being an acquired taste, pythons also infamously have high levels of mercury.

Siewe’s solution was instead the Python Huntress line of bracelets and Apple Watch Bands. Siewe hopes to bring awareness to the invasive python through her products by giving people something that they can wear and show people and say “Hey, this is made from a python from the everglades, this is what conservation looks like.”

Siewe believes this is a more efficient and humane solution to snakeskin fashion than the python farms almost all major fashion brands in the industry have. And her products are beyond “Made in the USA.” All Siewe’s line is made from leather she tans in the U.S.; from skins she has collected herself. Plus, a portion of the proceeds is donated to The Alliance for Flordia’s National Parks funding the programs which eradicate pythons.

“Conservation is the biggest part of this,” stressed Siewe, reflecting on her work. Siewe explained not enough people know, even in Florida, just how bad the Burmese python problem is. And the more awareness the better. She doesn’t know what the problem will look like in 10 or even 20 years, no one does, the problem is too new to be certain. But the more people who help in any way possible, the better the future looks for Florida and all the native species that the python impacts.