8 Anglers Who Smashed Records with Their Big Catch This Spring

These eight anglers smashed state, world and personal best records this spring—with the the photo evidence to boot. Check out these impressively large catches they reeled in!

While many people spent their Easter Sunday hunting for eggs, Captain Jake Matney, along with boat mates Devin Sarver and Jett Tolber, reeled in an 832.2-pound bluefin tuna 160 miles off the coast of Destin, Florida. After a 4.5 hour fight, this catch could break the current 326-pound state record set in 2017 if the Florida Fish and Wildlife Conservation approves. “We were stoked to finally land one that we could bring in and hang up,” Jett told News5WKRG. “Last trip we fought one for 10 hours and it broke off. So, bringing in this one meant a lot to me.”

While out on the lake with his father in Idaho, Lance and Jones Sport Fishing guide Joe Weisner, 12-year-old Tyler Grimshaw had the catch of a lifetime, reeling in a 9-foot, 11-inch monster of a sturgeon. Onlookers say Tyler was determined to reel in the fish himself, squatting on the rod and using his body weight for leverage. Being a life-long angler, Tyler was overwhelmed at the excitement of reeling in such a great catch. 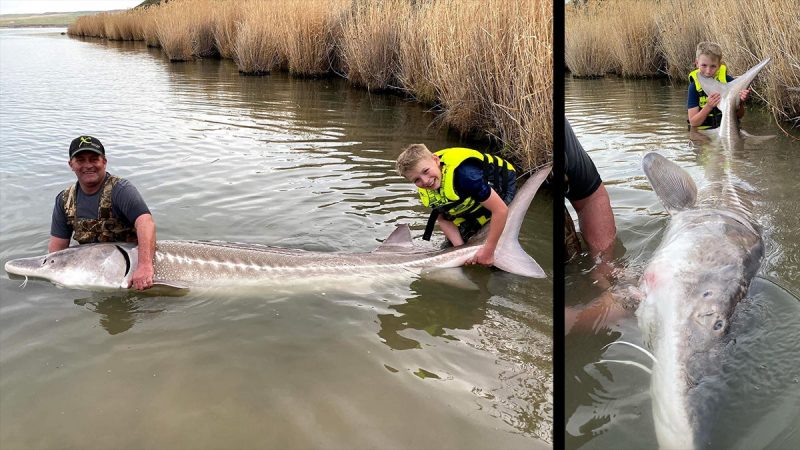 “I was excited,” Tyler told KTVB7 news, “This fish was far bigger than anything I had seen before. I was at a loss for words.”

Eugene Cronley from Mississippi was catfishing on the Mississippi River this April, completely unaware he was about to break a state record—and possibly a world record. While fishing over a 90-foot hole, his rod bowed over, and after a 30-minute battle, Cronley loaded a 131-pound catfish into his boat. Struggling to find a certified scale nearby that could handle the weight of this massive catch, Cronley kept the fish on ice for three days before taking it to Van’s Deer Processing where it came in at 131 pounds, a new state record. Now the International Game Fish Association is testing Cronley’s 30-pound line to see if he broke the line world record for blue catfish of 111 pounds.

“Those pictures don’t do him justice,” Cronley told the Mississippi Clarion Ledger. “He is a monster.”

On the Cherokee Reservoir in Tennessee, paddlefish are sought after for the incredible opportunity to catch a 100-pound fish in freshwater. Chad Collins was out aiming for just such an opportunity and scored a fish above and beyond that—one that tipped the scales at 120-pounds and was 75 1/2-inches long, and 41 1/2-inches in girth. The Tennessee Wildlife Resources Agency tweeted the confirmation that the fish is a new state record. 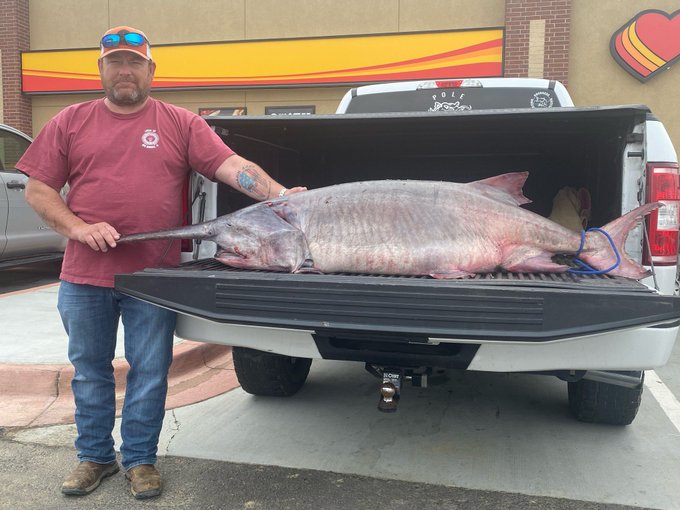 Kyle Mullenix of Maryland beat the previous state record for muskie, set in 2017, with his 33-pound catch this spring. Hailed as the “fish of ten thousand casts,” muskie are known to be one of the largest freshwater fish in Maryland. Mullenix had spent decades trying to catch one with little luck until now. Using a 7-foot spinning rod to reel in this tricky fish, it’s fair to say his luck has changed.

“He put up a good fight, but we didn’t think it was that big until it was on the bank,” Mullenix told the Maryland DNR. “Things don’t always go as planned, but now life has gotten a lot better.” 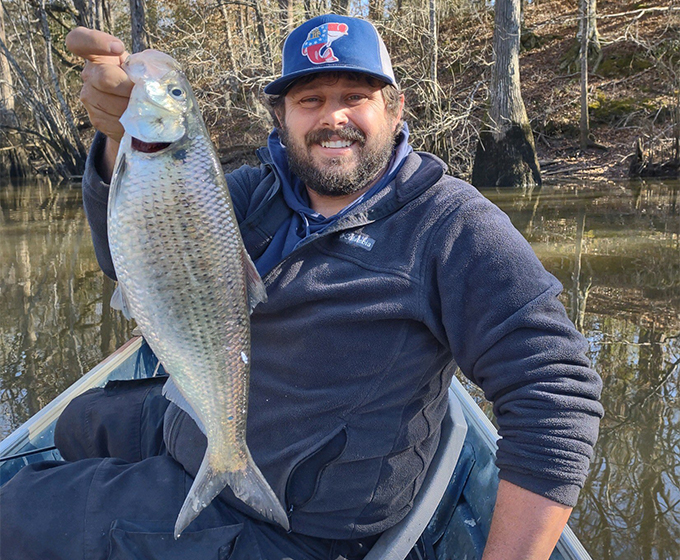 Mark Pate caught a 120-pound wahoo 70 miles off the coast of South Carolina this spring, taking turns with his Reel Labor crew to reel the wahoo in during the hour-long battle. Hauling the fish onto the boat with gaff hooks, the crew was excited to discover they had caught the largest wahoo in the South Carolina Wahoo series. 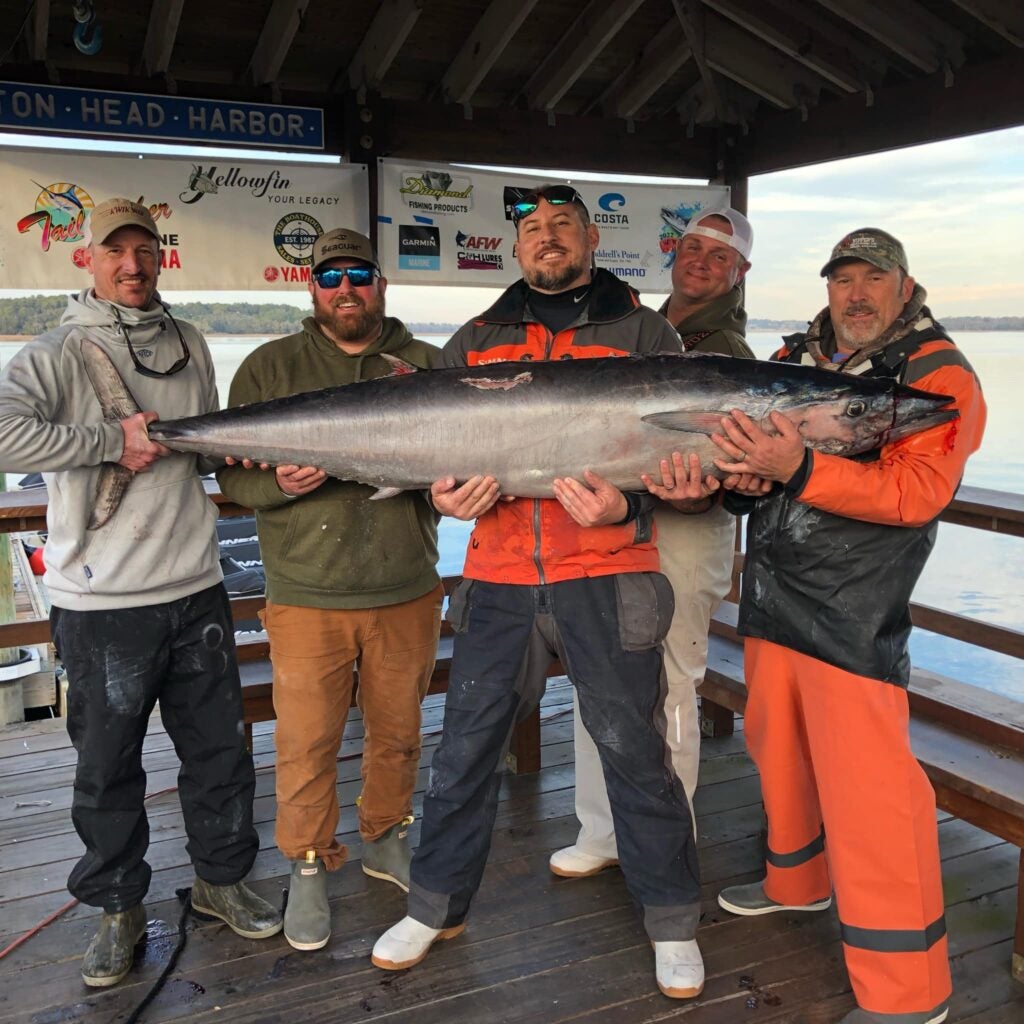 “When you get a bite, it’s extremely exciting!” Reel Labor crew Marc Pincus told Newsweek. “[Wahoo] burn the reel down as one of the fastest fish out there. On top of the excitement of catching them, they are a great eating fish. Right up there with tuna, you can do sushi on up to blackened, and it’s delicious. One of my favorites to eat and catch.”

Photo courtesy of the SC Wahoo Series, via Facebook.

Just recently, Josh Dolin possibly reeled in a state-record fallfish—in just two casts. Dolin’s fallfish is also possibly tied for the world record, which currently stands at 3-pounds 9.5-ounces. World records have to come in at over 2-ounces of the existing record. This big wing for Dolin came after a 3-mile hike and a flat tire on the way to get his catch weighed in on a certified scale. Dolin’s state record is being certified with Virginia DWR representatives now.

“It leaves me some room because I only made two casts,” Dolin told Outdoor Life, “I know there’s a bigger one in there.”

Have a big catch and a good story? We'd love to hear from you. Reach out to our editor at [email protected].